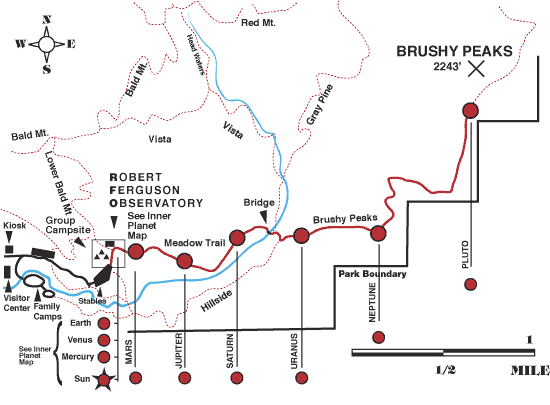 What is PlanetWalk?
PlanetWalk is a scale model of the solar system designed to fit within the boundaries of Sugarloaf Ridge State Park. Most people know that the planets orbit the Sun, but it is difficult to visualize just how small the planets are compared to the immensity of the Sun. It is equally difficult to imagine the vast empty spaces between the planets.

PlanetWalk is designed to give you a first-hand experience of these spatial relationships.

Unlike most models of the solar system which display either the relative sizes of the planets or the relative distances between them, PlanetWalk does both. To accomplish this, we shrunk the solar system more than 2,360,000,000 times, small enough for the park to include the orbit of distant Pluto, and large enough that the smallest planets could still be seen.

Though Pluto has been reclassified as a “dwarf planet” it remains the largest known member of the Kuiper Belt, a remote region orbiting our solar system that contains over 70,000 objects of significant size.

PlanetWalk begins at a large sign representing the Sun and takes you on a 4-1/2-mile round-trip journey to the orbit of Pluto. Along the way you will pass nine trail signs representing each of the planets in the solar system. Each sign is placed at a distance from the PlanetWalk Sun proportional to the actual distance between the Sun and that particular planet’s orbit. On each planet sign you will find a representation of the planet itself, drawn to the PlanetWalk scale.

What is the Solar System?
The Solar System consists of the Sun and all the various planets and heavenly bodies that revolve around it. A planet’s orbit is the path it follows as it revolves around the sun. Each planet moves steadily along its orbital path. The farther a planet is from the Sun, the more time it will require to complete each orbit. This is true not only because the more distant planets have longer orbits to complete, but because the farther an object is from the Sun, the more slowly it will move. Because of this, the planets will rarely, if ever, line up as neatly as they are arranged on the PlanetWalk.

While PlanetWalk extends to the East of the observatory, keep in mind that this is only one side of the solar system, which extends an equal distance on all sides of the Sun. (Perhaps you noticed the signs along Adobe Canyon Road leading into to the park. These signs mark the spots where the road crosses each planet’s orbital path to the west of the PlanetWalk Sun). 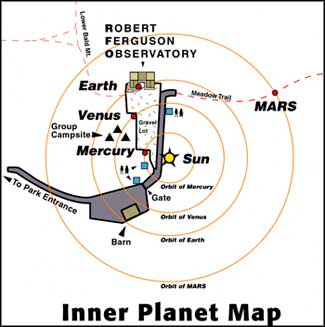 To begin the PlanetWalk, start at the sign representing the Sun in the southeast corner of the Observatory parking lot. Follow the attached map to find signs representing each of the solar system’s planets.

Please remember to bring water, wear good walking shoes, and be warned that between Uranus and Neptune the trail is steep and rocky and thus slippery.

With every step you take you will cross close to a million miles of empty space. To walk at the speed of light take one step every 5 seconds. The Sun is so large that a million Earths could fit inside, yet our Sun is only a middle-sized star. At the scale used for this model, the nearest neighboring sun is more than 10,000 miles away. 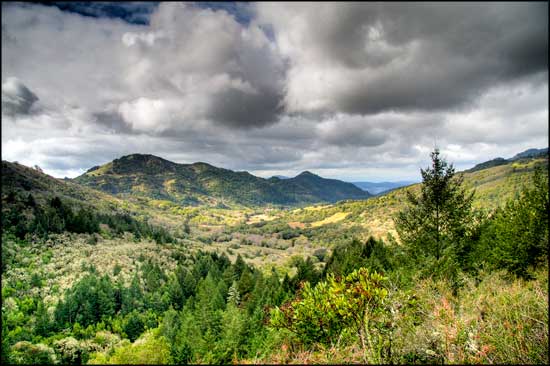 Looking back toward the Sun from Neptune. Photo by Ted Judah.

Angelo Parisi, an RFO docent, led the team that designed, constructed and wrote the interpretation of the PlanetWalk, and he led the effort to get State Park approval for this resource.