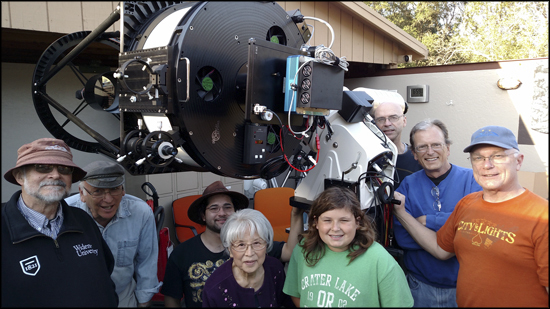 Astronomy is one of the few scientific fields remaining in which amateurs not only make significant contributions to research, but are essential to the process. The reason is simple: given the enormous number of astronomical objects and phenomena in our Universe, there are relatively few large professional telescopes available to study them. Amateurs routinely make their own discoveries but can also support professional efforts through collaboration.

Regardless of whether the large professional telescopes are ground-based or space-based, getting time on them is very competitive for professional astronomers, and those telescopes are expensive to maintain and operate. When professionals do have an upcoming project on a large telescope, they need to make the most efficient use of their time, so they often ask amateur astronomers to gather preliminary data (through imaging). Data from amateurs around the world can be analyzed to give a clearer understanding of the object, so when the professional has his or her precious time at one of the large telescopes, that time is not wasted. RFO contributions to professional research projects are made with data generated from image analysis.

Following is a completed research project: 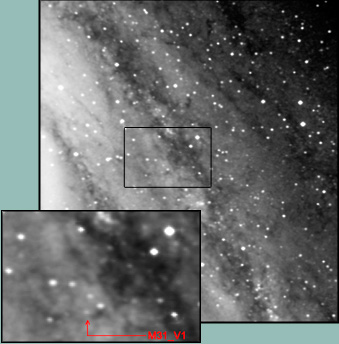 In the summer of 2010, the Hubble Heritage Team (HHT) asked the American Association of Variable Star Observers (AAVSO) to study M31_V1, a variable star in the Andromeda Galaxy.  “M31” refers to the Messier catalogue number (the Andromeda Galaxy is the 31st object listed in Messier’s catalogue), and “V1” is the designation given to the star by Edwin Hubble, indicating it was the first variable star he studied in that galaxy.

Historical background
M31_V1 is a variable star of the “delta Cepheid” type: these stars brighten and dim in a regular cycle, and are arguably the most important type of star to astronomers. In 1912, Henrietta Leavitt, an astronomer at Harvard University, discovered a relationship between a delta Cepheid’s period (its time to complete one cycle) and its luminosity: astronomers use that relationship to calculate the distance to the star.

Edwin Hubble didn’t discover the period-luminosity relationship nor its implications for determining distance, but he studied delta Cepheids in what was then called the “Andromeda Nebula” and in 1924 came to the startling conclusion that this “nebula” was in fact so far away it couldn’t possibly be part of the Milky Way—it had to be a completely separate galaxy. As this and other “nebulas” were confirmed to indeed be separate galaxies at very great distances from us (and most were receding from us), mankind’s understanding of the size and nature of the Universe was radically changed.

The project
The HHT had scheduled time on the Hubble Space Telescope (HST) in December 2010 and January 2011 to study the star M31_V1, but needed ground-based observations ahead of time to determine exactly when the star would be at its maximum and minimum brightness. It asked the AAVSO to send out a notice to its members, asking them to observe the star over a period of time.  Data from observers was then sent back to the AAVSO which analyzed the data and determined the star’s cycle. The HHT used the data to determine which dates and times would be best-suited for pointing the HST at the star.

RFO contributed photometry data for the project from September 2010 through the first week of January 2011. The AAVSO selected three observers’ data (RFO’s points in blue below): 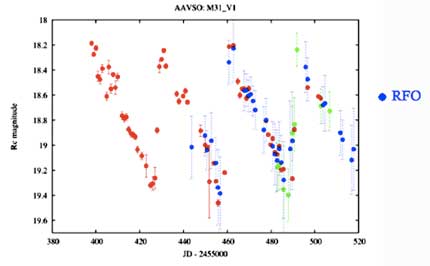 Based on these points, the star’s cycle was determined to be 31.414 days: the interval from one peak of brightness to the next: 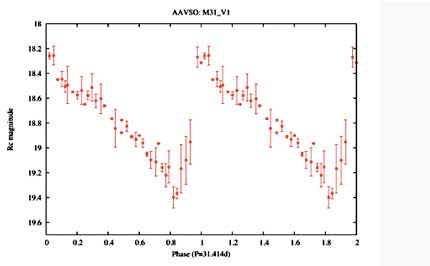 The Result
The Hubble Team’s 5/23/2011 press release, entitled “The Star that Changed the Universe,” describes the results, including a video and this image of the star’s cycle. 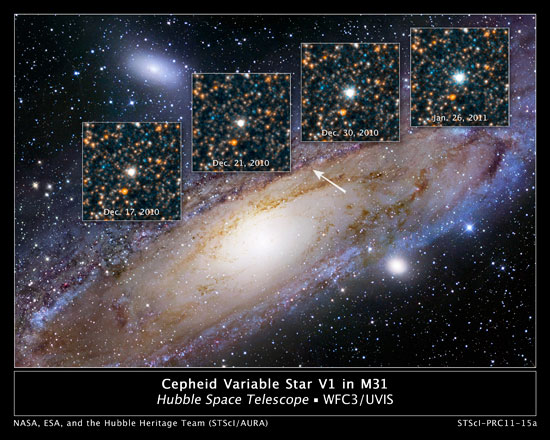